This past weekend a dear friend picked me up and we went to the beach to recharge. There is just something about water that feels like a conduit to reconnect to creation, and to the inner self; it feels pretty amazing.

As we were there we just hung out, talked to the kids for a short bit, got in the water and let the waves crash against us…or hug us, as I like to say. We meditated for a while and I went for a walk. 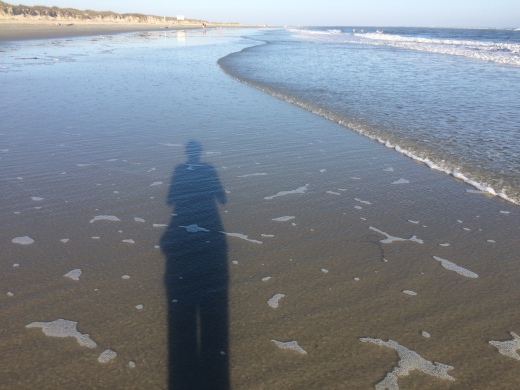 As I walked there was so much to notice… the water crashing on the sand, the waves cresting, the foam separating and collecting with other foam shapes, the beautiful linear designs made of different waves coming and going back to the sea, the lack of seagulls, the sun shining on my back, the cool but not cold breeze, the hard sand and the soft sand that made the calves ache, the trees, the people and what everyone was doing, the way the beach curved, and then there was my shadow that was walking in front of me, as if it was separate from me all this time I was paying attention to something else.

This shadow of mine, that I was steadily following, made me think about life and how we may handle the past. It seems that sometimes there are things that happen in the past that we don’t exactly deal with, but put in a dark corner of our mental ‘closets’ to deal with at a later time. We don’t always deal with them; not even at a later time. I call these things of the past shadows. Shadows cast from the happenings of the past.

At times we live in the present to some extent, but have not dealt with these shadows and they show up not as a reminder in a new situation, but as the old ‘thing’ that we never dealt with. Sometimes they come out in both new and old form.

So I thought to myself that in as many instances as I can, I want to strive to release and work on these things (when possible) so that they won’t cast shadows in my present…shadows that I will be chasing after because I haven’t yet cut them off (like in Peter Pan, but not really).

Are you good with dealing with issues when they occur?

Do you tend to keep emotions inside but then have to deal with them later?

What is your take on this?

Taking a walk is always an extremely informative experience for me. Maybe it is for you too 🙂 Here is a picture that brings a lot of peace to my heart. I hope it can do the same for you too, especially in times when you can’t go for a reflection walk.